It sounds like Antonio Brown‘s return from an ankle injury is imminent. While the veteran wideout has already been ruled out for tomorrow’s game against the Colts, Buccaneers head coach Bruce Arians told reporters that he’s hopeful Brown will be back next weekend against the Falcons. 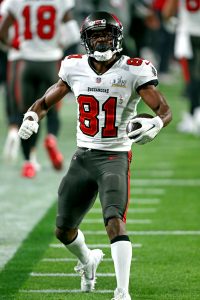 “He’s moving around a lot better,” Arians said (via NFL Network’s Tom Pelissero on Twitter). “He’s able to put more weight on the heel and bounce around on it some. We’ve got our fingers crossed.”

Brown suffered the injury way back in Week 6. Per ESPN’s Adam Schefter (via Twitter), doctors initially believed the injury would take about six weeks to recover. That timeline would line up with a Week 13 return. However, Greg Auman of The Athletic cautions (on Twitter) that Brown didn’t suffer a typical ankle injury. This sprain was closer to the heel, making it harder to anticipate a return date. We’ll likely get more clarity when the Buccaneers return to practice next week.

Brown, 33, has 29 receptions for 418 yards and four touchdowns in five games.The Buccaneers offense has been fine without the talented (and controversial) receiver, but Tom Brady and Co. will surely welcome back the veteran.