Ezekiel Elliott might be out for a little while. The Cowboys are thinking about holding the running back out of Thursday night’s game against the Saints as he heals up from his knee injury (Twitter link via Ed Werder of ESPN.com). 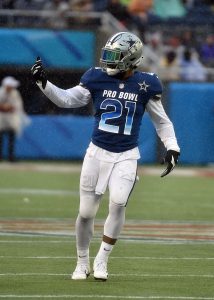 On the plus side, it doesn’t sound like Elliott will need to go on injured reserve, which would rule him out for at least three weeks.

“It’s that time of year,” head coach Mike McCarthy said this week (Twitter link via Todd Archer of ESPN.com). “Zeke’s running style is ferocious. He gives a pounding and he takes some hits. We need to evaluate that and this week we’ll see what the preparation looks like for him.”

Elliott’s knee has clearly been bothering him. Over the last five games, he’s totaled less than 200 yards while averaging 3.43 yards per carry. And, on Thursday night against the Raiders, Zeke was held to just 25 yards, his lowest total of the year.

Meanwhile, the Cowboys have lost three of their past four games, dropping them to 7-4 on the year. That’s still good enough for first in the woeful NFC East, though the Eagles are trending upwards and still within striking distance.

If Elliott can’t go against the Saints, the Cowboys will use Tony Pollard as their lead back with support from Corey Clement. And, if Zeke needs extra time to recover, they may want to consider a promotion for practice squader JaQuan Hardy.