“Multiple” clubs offered packages including three first-round picks and two third-round picks for Deshaun Watson, according to sources who spoke with NFL.com’s Tom Pelissero. Pelissero did not specify which teams made those offers, though the Dolphins and Panthers were said to be among the quarterback’s most serious suitors. 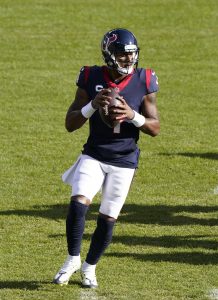 The Eagles and Broncos were also connected to the embattled Texans quarterback, though Denver GM George Paton says he did not have talks with Houston in the leadup to the deadline (Twitter link via NFL.com’s James Palmer). Dolphins owner Stephen Ross was bullish on acquiring Watson, but he backed out due to Watson’s still ongoing legal matters. The same goes for Panthers owner David Tepper, per Pelissero.

The key takeaway is that Texans GM Nick Caserio nearly got his asking price, despite everything going on with Watson. If and when Watson’s suits are resolved, the Texans should have the leverage to get a similar haul — unless the NFL hits Watson with a substantial suspension.

For now, Watson will remain in Houston and earn the remainder of his ~$10MM salary for 2021. Depending on how things go from here, the multiple-time Pro Bowler could have a new NFL home before the 2022 draft.