DeSean Jackson is officially a free man. The veteran wideout cleared waivers today, according to ESPN’s Adam Schefter (via Twitter). Jackson is now free to sign with any team. 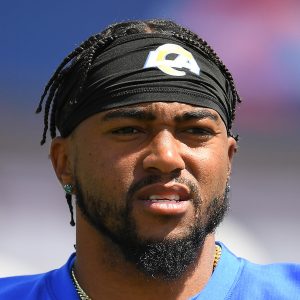 The Rams were unable to find a taker for Jackson prior to the trade deadline, so the team made the expected move and cut the player on Tuesday. The lack of trade (and waiver) interest doesn’t necessarily mean Jackson won’t have any suitors; rather, teams were anticipating his release and were willing to take their chances in free agency.

Since Jackson went unclaimed, the Rams will be left with the balance of Jackson’s $2.75MM base salary on the books. The receiver joined the Rams on a one-year, $4.5MM deal this past offseason.

However, the 34-year-old struggled to carve out a definitive role during his short stint in Los Angeles, seeing the field for about one-third of L.A.’s snaps. Jackson didn’t top 25 snaps in any of his games this year, and his playtime continued to dwindle, leading to a four-snap appearance against the Lions in Week 7. After that, the Rams held him out of action against the Texans to avoid a trade-scuttling injury.

Even at the age of 34, Jackson has torched the opposition for 27.6 yards per catch (albeit on only eight receptions), so a receiver-needy team will certainly appreciate his big-play ability. For his career, Jackson has 620 catches for 10,877 yards and 57 touchdowns.