The Broncos’ past two HC hires placed less emphasis on their defensive coordinator position, but the team hiring former Packers offensive coordinator Nathaniel Hackett will make that a more important position. The new Denver coach has a DC candidate in mind early. 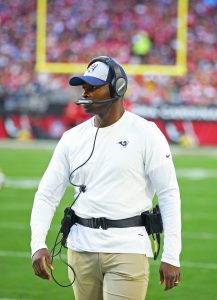 Rams passing-game coordinator Ejiro Evero is the early leader to become the Broncos’ DC, Ian Rapoport of NFL.com tweets. Hackett and Evero are close friends, Nicki Jhabvala of the Washington Post notes (via Twitter), having played collegiately at UC Davis together.

Evero, 41, has been on each of Sean McVay‘s five Rams staffs, moving from the team’s safeties coach to his current role last year. Ahead of Hackett’s final Packers season, the team interviewed Evero for the DC job that went to Joe Barry. But Evero, an NFL staffer since 2007, appears poised to be a strong contender for Denver’s DC job. It would be a “big upset” if Evero does not land the job, Mike Klis of 9News tweets.

Evero would have big shoes to fill leading Denver’s defense. While Vic Fangio could not lead the Broncos to the playoffs, he is one of this era’s top defensive coordinators. The Broncos ranked in the top 10 in points allowed and total defense in 2021. Evero did work under former Fangio assistant Brandon Staley during the latter’s season as Rams DC, potentially helping with continuity in Denver.

Additionally, the Broncos are expected to request an interview with Packers offensive line coach Adam Stenavich for their offensive coordinator role, Rapoport adds. Stenavich, 38, worked with Hackett on Matt LaFleur‘s Packers staffs for the past three seasons, having been on Kyle Shanahan‘s first two 49ers staffs — as San Francisco’s assistant O-line coach — before that. Stenavich and previous Broncos OC Rich Scangarello were on Shanahan’s staff together from 2017-18. Hackett is expected to be a play-calling head coach, which the Broncos have not had since Gary Kubiak‘s tenure.