The only team connected to Josh McDaniels during this year’s HC hiring period, the Raiders are interested in speaking with the longtime Patriots offensive coordinator. 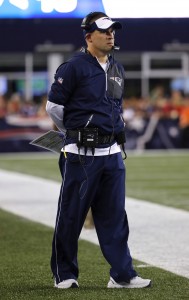 They sent McDaniels an interview request Thursday, Adam Schefter of ESPN.com tweets. The Raiders already interviewed Patriots exec Dave Ziegler, who also worked with McDaniels in Denver, and appear to still be considering a Patriots West ticket. McDaniels, who has been on Mark Davis‘ radar for weeks, is expected to interview Saturday, per NFL.com’s Ian Rapoport (Twitter links).

While a Wednesday report indicated the Raiders were moving away from a Ziegler-McDaniels pairing, NFL.com’s Mike Garafolo tweets league buzz still points to McDaniels being a preferred option in Las Vegas. This would certainly be an interesting direction to go, given McDaniels’ past and Raider players’ endorsements for interim HC Rich Bisaccia to keep the job. That said, one source informed Pro Football Talk’s Mike Florio a Ziegler-McDaniels power structure in Vegas is “just about a sure thing.” McDaniels has been down a similar road before, only to turn back at the last minute.

But McDaniels does have an extensive OC resume, collecting three Super Bowl rings during his time working with Tom Brady in New England. Of course, his rough tenure as Broncos HC and decision to spurn the Colts affected his standing within the league. In terms of high-level experience, however, almost no one in this cycle can match McDaniels.

In his 10th year back in charge of the Patriots’ offense, McDaniels helped the fifth quarterback picked in last year’s draft — Mac Jones — have the best season among the 2021 rookie QBs. Despite his controversial Colts decision four years ago, the 45-year-old assistant comes up in coaching rumors annually. The two-time Patriots OC has been picky on the interview front, and given his Denver tenure and Indianapolis decision, his next HC job might be his last.

Here is how the Raiders’ HC search is shaping up thus far: