The Giants are interviewing Bengals defensive coordinator Lou Anarumo for their vacant head coaching position today, per Jason La Canfora of CBS Sports (via Twitter). This appears to be the first time Anarumo has ever generated HC interest. 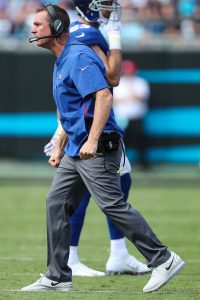 Anarumo, 55, began his coaching career as the RB coach at Wagner College in 1989, and he joined the NFL ranks over 20 years later, becoming the Dolphins’ defensive backs coach in 2012. He was briefly promoted to defensive coordinator partway through the 2015 season and resumed his role as DB coach for the 2016-17 campaigns under Adam Gase.

He served in that same capacity for the Giants in 2018 before being hired as the Bengals’ DC in 2019. When he took the job, Cincinnati was coming off a season in which it finished dead-last in total defense. In his first two years working under head coach Zac Taylor, the Bengals still fielded bottom-10 defenses, and Anarumo’s unit wasn’t much better in 2021 in terms of yards allowed. However, the defense did perform well this year when it mattered most, including last night’s divisional round win over the Titans, which featured three interceptions of Tennessee QB Ryan Tannehill.

Anarumo, a New York native, has ties to the organization that go beyond his one year as DB coach. He and Big Blue’s new GM, Joe Schoen, spent a few years together with the Dolphins, and while Schoen’s connections to other head coach candidates — namely, Bills OC Brian Daboll and DC Leslie Frazier — are more recent and probably more meaningful, the new top exec clearly sees something in Anarumo worth exploring.

Here’s an updated list of the Giants’ HC candidates: