The first finalist for the Giants’ head coach position has been revealed. As Tom Pelissero of NFL Network reports (via Twitter), Bills offensive coordinator Brian Daboll will have a second interview with the team today. 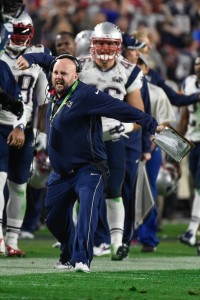 Daboll was the first candidate to take part in the initial round of interviews with New York. That certainly didn’t come as a surprise, between the HC interest he’s generated with the Dolphins and the Bills connection to newly-hired general manager Joe Schoen. Widely believed to be a target for the Giants once Schoen was brought in, the 46-year-old had finished his initial interview within a matter of hours of his former Bills colleague being hired.

That first interview was conducted via teleconference with Schoen and co-owners John Mara and Steve Tisch. This time, the meeting will take place in person; the same is expected to be true of New York’s first interview with Cowboys defensive coordinator Dan Quinn, to take place today. Quinn, one of the most sought-after candidates in this year’s hiring cycle, has already been linked to five other HC vacancies around the league.

Worth noting is the fact that Daboll cannot be hired right away, regardless of the outcome of today’s interview. As NJ.com’s Darryl Slater tweets, the Giants still need to conduct at least one in-person interview with a minority candidate to remain in compliance with the Rooney Rule. It must involve someone from outside the organization, so their upcoming meeting with current DC Patrick Graham doesn’t factor into that total. The likeliest way to meet the requirement would be a second interview with Bills DC Leslie Frazier, whose first meeting with the front office was conducted electronically, or an in-person sit down with Brian Flores.