It has been a bit since Kris Richard worked as a defensive coordinator. He last did so in 2017, but two AFC North franchises are interested to see if the current Saints assistant fits the bill. 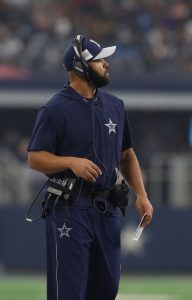 In addition to the Steelers’ request to interview Richard, the Ravens are interested in speaking with him about their DC vacancy, Ian Rapoport of NFL.com tweets. Now that the Saints are set to interview Dennis Allen to replace Sean Payton, a promotion in New Orleans could be on the table soon.

Richard, 42, worked as the Seahawks’ DC from 2015-17, taking over for Dan Quinn. Richard stopped the line of Seattle DCs rising to HC jobs, a procession that included jumps for Quinn and Gus Bradley. Under the former Legion of Boom position coach, however, the Seahawks ranked in the top five defensively in both 2015 and ’16. Rather than rise to a coaching job, Richard instead trekked to Dallas for two seasons as Cowboys DBs coach.

Richard helped Byron Jones‘ transition to cornerback lead to a Pro Bowl nod but was not retained under Mike McCarthy. After taking the 2020 season off, Richard joined the Saints as their secondary coach. The Ravens have yet to hire a defensive coordinator from outside the organization, but interview requests for Richard and Cowboys DBs coach Joe Whitt Jr. show they are certainly considering it. The team already met with its D-line coach, Anthony Weaver, and has its 10-year DBs coach, Chris Hewitt, on the radar as well.