There had been a strong possibility that the 2021 season was the final chapter of Calais Campbell‘s career. Instead, he announced Sunday night that he will return next year, writes ESPN’s Jamison Hensley. 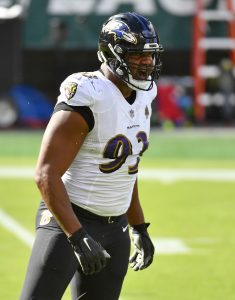 The 35-year-old is a pending free agent, and he left the door open to retirement during the 2021 campaign. However, he wants to take at least one more shot at a Super Bowl title, the only accolade that has eluded him during his 14 seasons in the NFL.

“The feeling I have right now after seeing [the Rams] celebrate a world championship, I have a desire to go out there and play football and to compete”, he said. “So, I’m definitely not retiring. I’m coming back”.

A six-time Pro Bowler, former All-Pro, Walter Payton Man of the Year winner, 2017 Defensive Player of the Year and a member of the 2010s All-Decade Team, Campbell is also in search of his 100th career sack. He currently sits at 93.5, but has transitioned more and more into a run-stopper than a pass rusher in recent years.

Campbell’s first season in Baltimore was in 2020, where he earned a fourth consecutive Pro Bowl appearance. While his total tackles increased in 2021 to 49, his sack numbers dropped from four to 1.5. Still, his ability to defend the run that has been prevalent throughout his previous time with the Cardinals and Jaguars should garner him plenty of interest if he reaches the open market.

Ravens general manager Eric DeCosta has already been in discussion with Campbell regarding a new contract to stay in Baltimore. However, the defensive line – which has recently consisted of Campbell, along with fellow veterans Brandon Williams and Derek Wolfe – has been named as an area where the team will work to get younger at during the offseason. Perhaps, then, Campbell’s next, and quite possibly final, campaign in the NFL will be with a fourth team.

6 comments on “Calais Campbell Returning In 2022”