The Panthers now have their long snapper under contract for at least one more season, coming to terms with J.J. Jansen on another new deal Wednesday. 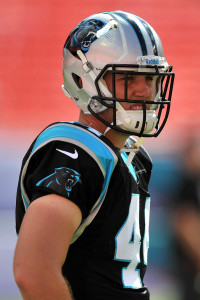 Carolina’s deep snapper since 2009, Jansen agreed on a one-year extension through the 2022 slate. This does not necessarily assure Jansen of keeping his job next season, with the Panthers using a draft choice on a long snapper — Thomas Fletcher — in 2021. But this does renew that competition for another year.

Fletcher spent last season on IR, tabling a competition with Jansen. However, the 2021 sixth-round pick won the Patrick Mannelly Award for the nation’s best long snapper while at Alabama. He would certainly represent competition for Jansen, despite the latter’s lengthy run with the Panthers. Fletcher is under contract through 2024.

Jansen has played in every Panthers game since beginning his long-snapping tenure with the team in 2009. His 209 regular-season games trail only John Kasay (221) for most in team history. Jansen, 36, made the Pro Bowl in 2013. He signed a five-year extension in 2016 and returned to Carolina on a one-year deal in 2021.