The Bears have another key piece for their defensive line. Ian Rapoport of NFL Network tweets that the Bears are expected to sign defensive tackle Larry Ogunjobi. Brad Biggs of The Chicago Tribune adds that the contract is worth $40.5MM over three years, with $26.35MM guaranteed (Twitter link). 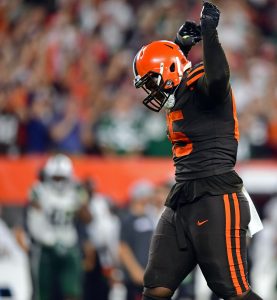 After four seasons with the Browns, Ogunjobi signed a one year, $6.2MM deal with the Bengals in March of last year. He was a huge part of their defensive overhaul and went on to record 49 tackles and seven sacks in 16 games. The investment in Ogunjobi – along with the likes of Trey Hendrickson and Chidobe Awuzie – certainly paid off, as the Bengals won the AFC North for the first time since 2015. Unfortunately, his season was brought to a halt with a right foot injury before the divisional round.

Ogunjobi saw a 68% snap share on defense during his time with the Bengals. He finished 2021 with 49 tackles, seven sacks, 12 total tackles for loss, and 16 quarterback hits.