James Bradberry is garnering trade interest around the league (Twitter link via NFL.com’s Ian Rapoport). The high-priced cornerback was a favorite of GM Dave Gettleman, but the Giants’ new regime may be open to moving him. 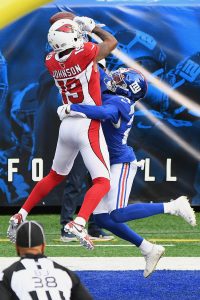 [RELATED: Giants To Listen On Barkley]

The Giants signed Bradberry to a three-year, $45MM deal ($32MM guaranteed) in 2020. At the time, he was one of the top free agents on the market. Teams were high on him, even though the analytics weren’t quite as fond. Bradberry, a multi-year starter for the Panthers, was ranked as a middle-of-the-road defender by Pro Football Focus in his walk year.

Bradberry earned a Pro Bowl nod in his first Giants season but he didn’t play up to his contract in 2021. Now on the verge of his 29th birthday in August, the Giants may opt to trade him for draft capital while taking much of his $21.8MM cap hit off of the books. And, as Rapoport notes, a Bradberry deal seems much more likely that a trade of star running back Saquon Barkley.

Despite the down year, Bradberry should still hold interest for cornerback-needy teams. He’s not too far removed from that Pro Bowl 2020, when he posted the lowest passer rating of any CB in the league, per PFF.