The Giants’ new regime could be making some serious changes this offseason. When asked about the possibility of trading Saquon Barkley, GM Joe Schoen wouldn’t rule it out. 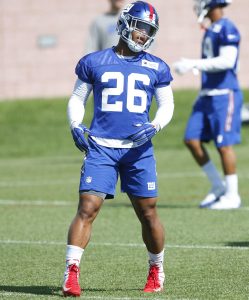 “I’m open to anything. … I’m not going to say yes to every deal, but I’m going to listen,” Schoen said (Twitter link via Adam Beasley of Pro Football Network).

Barkley was once untouchable. Now, after a string of injuries, the Giants are at least open to dealing him. After being selected No. 2 overall in 2018, Barkley was nothing short of stellar — his historic rookie campaign included 2,028 all-purpose yards and 15 touchdowns in a full 16-game slate. He had an equally impressive 5.4 yards per touch in 2019, but he missed three games thanks to a high ankle sprain.

Then, in 2020, he was limited to just two games before succumbing to a torn ACL. Barkley managed to play in 13 games this past year, but clearly wasn’t at 100%. He finished with just 593 yards off of 162 carries, good for just 3.7 yards per attempt.

The Giants have already exercised Barkley’s fifth-year option for 2022, but they may prefer to put those dollars elsewhere and target younger options in the draft. Meanwhile, they may be able to save money elsewhere by negotiating a new deal with wide receiver Sterling Shepard.