One of the draft’s top pass rushers will be sidelined for at least the next six months. According to ESPN’s Adam Schefter (on Twitter), Michigan linebacker David Ojabo has suffered a torn Achilles. 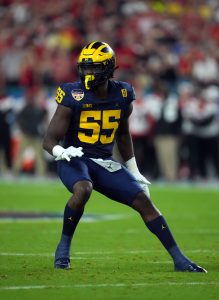 Doctors pointed to Rams running back Cam Akers‘ six-month recovery from a torn Achilles, and they believe Ojabo will have a similar timeline. Doctors also expect a “full and complete recovery.”

This is a tough break for a prospect who has rocketed up the draft boards following a breakout 2021 campaign. Ojabo finished the season with 11 sacks and 12 tackles for loss, helping guide Michigan to the College Football Playoff. ESPN’s Mel Kiper had the linebacker going in the first round of next month’s draft, and it’s uncertain how this untimely injury will affect his draft status (per ESPN’s Tom VanHaaren).