The Panthers are continuing to manufacture 2022 cap space. The team announced today that they have restructured the contract of linebacker Shaq Thompson. 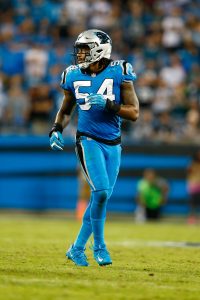 Thompson, 27, was set to count for $18.26MM against the cap for next season before the move. Instead, as ESPN’s David Newton notes, the team has created $5M in space (Twitter link). With even more financial flexibility, Carolina now has plenty of room to be aggressive in free agency.

A 2015 first round pick, Thompson has spent his entire seven-year career with the Panthers. He ranked second on the team in tackles last year with 104, adding two sacks and five pass deflections. In total, he has racked up 574 stops, 11.5 sacks and four forced fumbles.

Thompson is under contract for another two seasons, where he will no doubt continue to be an anchor on the team’s defense. Many of the offseason questions for the team revolve around the secondary, where corners Donte Jackson and Stephon Gilmore are both pending unrestricted free agents. Moves such as this one – along with the re-working of Moton’s deal – give the team more of a chance to keep both. Alternatively, it could mean room for one, along with a significant addition at another position.