The Panthers continue to make key decisions on their own roster in the lead-up to free agency. Today, that consisted not of an extension for one of their players, but another move which nevertheless frees up cap space. Per a team announcement, they have re-worked the contract of right tackle Taylor Moton. 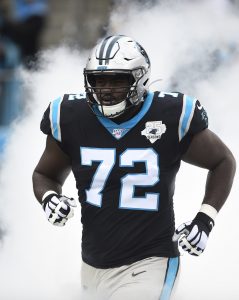 As a simple restructure, Moton’s compensation ($16MM) will stay the same for 2022. However, by prorating part of the deal over the remainder of its length, the team has pushed some of his cap hit down the road. Joe Person of The Athletic tweets that the move has created $11MM in cap space for this season.

Less than one year ago, Moton signed a four-year, $72MM contract after Carolina placed the franchise tag on him. At just under $18MM per year on average, it placed him amongst the highest-paid right tackles in the league, and one of the best compensated offensive linemen in general. The commitment came after Moton, 27, established himself as one of not only the NFL’s most talented, but also most durable linemen. That trend continued in 2021, where he appeared in all 17 games, playing over 1,000 snaps for the fourth straight campaign. PFF credits him with just one sack allowed, and five penalties committed.

Aaron Wilson of Pro Football Network adds that, as a result of the move, $3.7MM in cap charges will be added to each of the remaining years on the contract, beginning in 2023. Moton’s base salaries are scheduled to be under that original $18MM average, with sizeable roster bonuses due on the third day of each new league year until 2026.

This grants the Panthers more flexibility for the coming weeks. They have already gotten new deals done with some of their pending free agents, most notably tight end Ian Thomas and linebacker Frankie Luvu. They still have 19 UFAs though, and, with mounting pressure on head coach Matt Rhule to start winning, could be at least targeted spenders on the open market.