The Dolphins already know they will have tight end Mike Gesicki under contract for 2022, after he signed his franchise tender last month. As Pro Football Network’s Adam Beasley reports (in a pair of tweets), however, it doesn’t appear as though the two sides are “particularly close on a [long-term] deal”. 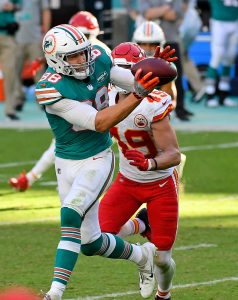 Gesicki, 26, was named as a prime candidate to be tagged this offseason. He has established himself as a key piece of the team’s offense, particularly in the past two years. Since 2020, the former second-rounder has posted 126 catches for 1,483 yards and eight touchdowns. That earned him a one-year deal worth $10.93MM as a result of the tag.

“It’s obviously not the end-all be-all goal” Gesicki said. “It’s definitely more team friendly than player friendly. When asked about the possibility of a long-term extension, he said, “I am absolutely open to negotiation, but it’s not really up to me… If they reach out, my agent will be listening.”

There was some concern Gesicki could file a grievance with the Dolphins with respect to being tagged as a tight end. Given that he is used much more like a slot receiver, many thought he would seek to negotiate a figure between the TE and WR values. Instead, both he and the Dolphins have until the summer to agree on a new deal. If one can’t be reached, Miami will move forward this season evaluating how Gesicki fits into an offense which now includes Tyreek Hill as a competition for targets.

5 comments on “Dolphins, Mike Gesicki Not Close On Long-Term Deal”