The Jets are adding another contributor to their safety corps and another defensive back familiar with Robert Saleh‘s system. Former 49ers safety Marcell Harris is joining the Jets, Mike Garafolo of NFL.com tweets. 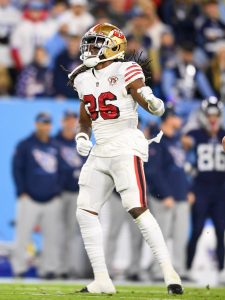 Harris visited the Jets on Thursday. He will follow D.J. Reed as ex-49ers DBs to join Saleh in New York this offseason. The Jets also added former Buccaneers safety Jordan Whitehead, shortly before losing Marcus Maye to the Saints, in March. Harris, 27, figures to add depth or potentially give the Jets another starter option alongside Whitehead.

A former San Francisco sixth-round pick, Harris saw extensive action on defense. Although the ex-Florida Gator backed up Jimmie Ward and Jaquiski Tartt, injuries to the 49ers’ starters opened the door to playing time throughout Harris’ Bay Area run. Harris started 20 games with the 49ers, including a career-high seven last season. Some of those starts came at linebacker, when Harris filled in for an injured Dre Greenlaw at points last season.

Harris also improved in coverage last season, seeing his passer rating as the nearest defender plummet considerably — to 75.8 — after those numbers hovered well above 100 during his first three seasons. The 215-pound defender made 155 tackles (including a career-high 44 last season) over his four-year run. The Jets return C.J. Mosley and Quincy Williams on their defensive second level. They figure to add help on all three levels in the draft, given the team’s last-place defensive rankings in Saleh’s debut.