Jets Willing To Trade No. 10 Pick For D.K. Metcalf?

As one of the teams currently holding not one, but two, top-10 picks in this week’s draft, the Jets are at the heart of the intrigue surrounding Day 1. They have also been aggressive in trying to add to their receiving corps, to no avail so far. The possibility could still exist, though, for them to acquire one of the big-name wideouts they have previously been linked to. 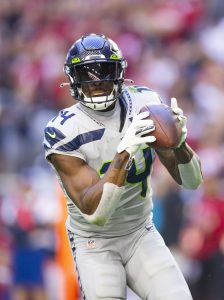 According to Tony Pauline of Pro Football Network, Jets general manager Joe Douglas remains open to the thought of using the 10th overall pick to make a sizeable trade. It has already been reported that the team is “all-in” on acquiring Deebo Samuel and that their second Day 1 selection is on the table to do so.

As Pauline reports, however, the same is true with regards to D.K. Metcalf. “If Douglas could pry [Metcalf] from the Seattle Seahawks with the 10th pick”, Pauline writes, “he would make that move”. The Jets were named as one of the teams calling Seattle about the 24-year-old’s availability earlier this month. Similar to the 49ers when asked about Samuel, however, the Seahawks have maintained that they are not looking to trade him, prioritizing an extension instead.

New York already made a significant push – in terms of both draft capital to facilitate a trade, and financial commitment on a long-term deal – to try and land Tyreek Hill when it became known he would be on his way out of Kansas City. If they come up short on landing Samuel, they should still be well in range of most, if not all, of this year’s top receiving prospects. Included among those is Jameson Williams, whom the Jets have shown interest in; assuming he recovers from a torn ACL, he has the potential to provide a similar skillset to what Metcalf offers.