One of the teams with a key decision to make with respect to fifth-year options was the Panthers. Not surprisingly, they officially picked up the option on edge rusher Brian Burns yesterday, but the team is hoping to have him under contract for much more than the next two seasons. 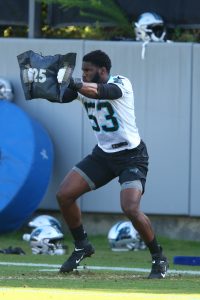 Panthers general manager Scott Fitterer said during yesterday’s announcement “we have hopes of extending him beyond [2023]” (Twitter link via Joe Person of the Athletic). It had long been known, of course, that Carolina would exercise the option on Burns; likewise, it comes as little surprise that they would want to get a long-term deal done with the 24-year-old.

The 16th overall pick in 2019, Burns had an immediate impact during his rookie season. Despite playing less than half of the team’s defensive snaps, he registered 7.5 sacks. In the two seasons since then, he has taken his production a step further, with back-to-back years at 50+ tackles and nine sacks. He was named to his first career Pro Bowl in 2021.

Between those numbers and his age, getting a second contract done as soon as possible would make plenty of sense. His 2023 salary will be just over $16MM as a result of the option being picked up, which could provide a framework for a longer commitment. Burns will continue next season as an anchor of the team’s pass rush, along with the likes of Yetur Gross-Matos and the recently re-signed Frankie Luvu.