It remains to be seen if the Saints will end up selecting a quarterback during the first round of tomorrow’s draft. However, if they do, one faction of the organization could be disappointed. According to Albert Breer of SI.com, the Saints front office likes Pittsburgh quarterback Kenny Pickett while the coaches seem to prefer Ole Miss’ signal caller Matt Corral. 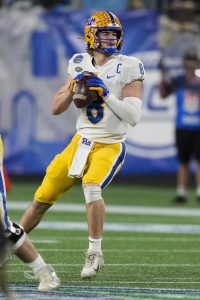 There have been some recent rumblings that the Saints could use one of their two first-round selections on a quarterback, especially after the organization hosted Corral, Pickett, Liberty’s Malik Willis, and UNC passer Sam Howell on top-30 visits. The front office had made it clear that they didn’t make their trade with the Eagles with the goal of selecting a quarterback, but the move certainly set them up if one of their preferred prospects falls in their lap.

The Saints added Andy Dalton to pair with Jameis Winston, and regardless of what happens in the draft, one of the veterans will likely be under center come the start of the 2022 season. Dalton’s one-year pact and Winston’s two-year extension (which is effectively a one-year deal) certainly won’t preclude the organization from selecting a rookie QB, especially after the team made it clear that Taysom Hill will no longer be considered for the position.

Armed with No. 16 and No. 19, the Saints will have two decisions to make tomorrow night. Per ESPN’s Jeremy Fowler and Dan Graziano, sources believe the Saints are positioning themselves to get one of the draft’s top offensive tackles after losing Terron Armstead. Other sources believe the front office could be targeting a wide receiver.