Saints Willing To Move Up Or Down In First Round

The middle and later stages of tonight’s first round are expected to house most of the trade action which could take place. That makes the Saints one of the most important teams to watch. It comes as little surprise, then, that New Orleans has been calling other teams regarding moves up and down the board (Twitter link via ESPN’s Jeremy Fowler). 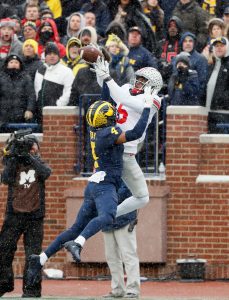 After their deal with the Eagles, the Saints own the 16th and 19th overall picks. That likely puts them in range of some – if not all – of the top quarterbacks in the class. If the team does elect to add a signal-caller, it appears their preference would be either Kenny Pickett or Matt Corral. With that said, the team has already re-signed Jameis Winston and added veteran backup Andy Dalton, leading some to believe other positions could be of greater concern to them.

The two positions most referenced along those lines are offensive tackle and wide receiver. In need of a Terron Armstead replacement, Trevor Penning will likely be the top blocker still available at 16, so a move up to select a top-tier option like Charles Cross wouldn’t come as a surprise. Likewise, the team would, in all likelihood, need to move into the top 10 (or thereabouts) to be in range of wideouts such as Drake London, Jameson Williams and Garrett Wilson as they look to boost last year’s passing game.

If the top options at those positions are off the board by the middle of the round, though, a trade down would become a possibility. The strength of this class is said to be truly seen on Day 2; especially if the team chooses not to add a quarterback, then, and a run on the position occurs in the 20s, moving down could become mutually beneficial for the Saints and a QB-hungry team.

Like all Day 1 trades, the ultimate decisions teams make will become known in a matter of hours. Depending on how the top of the board shakes out, New Orleans could become one of the most active teams, and therefore one worth keeping an eye on.