Despite being a seventh-round pick, Jonathon Cooper showed some promise as a Broncos edge rusher as a rookie. The team, however, restocked its outside linebacker corps this offseason, potentially dropping the Ohio State product lower in the pecking order. 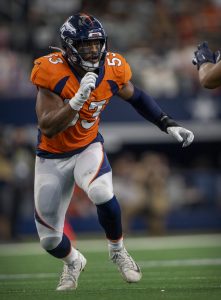 Cooper also will miss the bulk of the Broncos’ offseason program. A ring finger tendon injury sustained this week will result in a surgery that will sideline the off-the-bench pass rusher for the remainder of Denver’s OTAs/minicamp stretch, Mike Klis of 9News notes. He is expected to be ready for training camp.

This is familiar territory for last year’s No. 239 overall pick. Cooper missed the Broncos’ OTAs and minicamp last year because of a heart surgery, an issue that caused him to fall toward the bottom of the draft. That issue did not result in any missed games for the ex-Buckeye, who recorded two sacks in the Broncos’ upset win over the Cowboys.

Cooper, who finished his rookie slate with seven quarterback hits and a fumble recovery, was a special teams regular and took on a bigger role after Von Miller‘s midseason injury and subsequent trade to the Rams. Cooper missing time this offseason may be more significant — due to the team’s additions and reshuffling at the edge positions.

Denver signed Randy Gregory to lead its edge corps and used its top draft choice (No. 64 overall) on Oklahoma’s Nik Bonitto. The Broncos also are trying ex-Cooper Ohio State teammate Baron Browning as an outside ‘backer, moving him from an inside linebacker position that features a thinner cast. Contract-year rushers Bradley Chubb, whose extended absence last season opened the door for Cooper and others, and Malik Reed also reside in this crowded position group. Christopher Allen, who recorded six sacks for Alabama’s 2020 national championship team before missing 2021 with a Lisfranc issue, also signed with the Broncos as a UDFA. Allen is not yet at full speed, per Klis, as he continues to recover from that injury.