An NFL staffer since 2006, Freddie Kitchens is heading back to the college ranks. South Carolina announced the former Browns head coach will work as a senior football analyst on Shane Beamer’s staff. 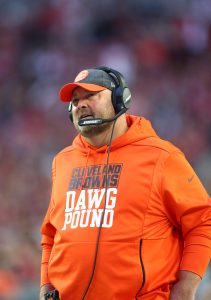 Kitchens worked with Beamer at Mississippi State in the 2000s but has been on an NFL sideline in each of the past 16 years. He spent the past two years on Joe Judge‘s Giants staff, finishing the 2021 campaign as Big Blue’s offensive coordinator.

A few current NFL head coaches have used stopovers in the college ranks as a springboard back to high-profile pro gigs. Brian Daboll spent the 2017 season at Alabama; Zac Taylor was the Cincinnati Bearcats’ OC in 2016; Lovie Smith spent five years as Illinois’ HC. Bill O’Brien is currently Alabama’s OC. Kitchens’ work on the HC/OC level may not lead to him receiving another such opportunity, but at 47, the longtime NFL staffer should have some time to craft a rebound effort.

The Browns made Kitchens a one-and-done after a disappointing 2019 season, one in which Baker Mayfield regressed after a promising rookie year under Kitchens, and the Giants ended the Judge regime after two seasons. Kitchens succeeded Jason Garrett as Giants OC in November but mostly oversaw an offense featuring backup quarterbacks. Following Daniel Jones‘ injury, Big Blue’s 2021 offense bottomed out and finished 31st in both points and yards. Judge has resurfaced with the Patriots, being set to play a prominent role in Mac Jones‘ second season.