The Seahawks may be having an open competition for their starting QB spot. However, veteran Geno Smith‘s familiarity with the offense gives him the early lead over newcomer Drew Lock. During a recent radio appearance, Seahawks offensive coordinator Shane Waldron admitted that Smith is the current front runner for the starting gig. 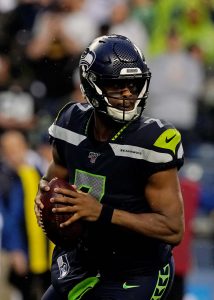 “Right now, Geno has done such a good job of carrying over (the offensive principles from 2021). He already had a head start over Drew right there,” Waldron (h/t to Charean Williams of ProFootballTalk.com). “We have a long time to go. We are just in T-shirts and shorts right now, going against air. We have a long way to go to see where this competition (goes).”

The Seahawks were apart of the quarterback carousel when they dealt Russell Wilson to Denver, but they surprisingly haven’t been on the receiving end of the continuous turnover. The team has seemingly distanced themselves from available QBs like Baker Mayfield and Jimmy Garoppolo, and they’re prepared to navigate this post-Wilson era with either Smith, who spent the last three seasons as Seattle’s backup, or Lock, a former second-round pick acquired in the Broncos trade.

It’s obviously in the organization’s best interest to develop the 25-year-old Lock vs. the 31-year-old Smith, although Lock’s impending free agency certainly adds some uncertainty to the situation. Lock has largely struggled as a starter, and while the ex-Mizzou prospect did play in two offensive systems in his first two years, Teddy Bridgewater beat him out for Denver’s QB1 job last year and held him off throughout the Broncos’ time in playoff contention. This came after the strong-armed passer tied for the 2020 interception lead, with 15, despite missing three-plus games. Smith has made five starts over the past seven seasons. Three of those came last season, with the former second-round pick did show some promise, completing 68% of his passes on 7.4 yards per attempt — numbers superior to his Jets-era work, albeit in a small sample size — and finishing with a 5-to-1 TD-INT ratio.