Mike Davis has found his next NFL home. The veteran running back is signing with the Ravens, as first reported by Jordan Schultz and confirmed by Pro Football Network’s Aaron Wilson (Twitter link). 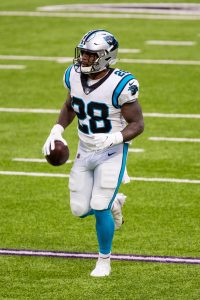 The 29-year-old was released last week by the Falcons. There had been optimism surrounding his arrival with his hometown team, but he ended up producing similar numbers to his career averages. He appeared in all 17 games, but only started eight, totalling 762 scrimmage yards while scoring four touchdowns. The team leaned more heavily on Cordarrelle Patterson and has since added Damien Williams in free agency and Tyler Allgeier during the draft.

While 2021 didn’t go according to plan for Davis, he is one year removed from the best season of his career, which came with the Panthers. Filling in for Christian McCaffrey, he became the team’s lead back and started 12 of 15 games. He rushed for 642 yards and six touchdowns, but was a key piece to the team’s passing game as well. He totalled 373 yards and a pair of scores through the air, earning him the two-year deal from the Falcons which was terminated this offseason.

In Baltimore, Davis will join a crowded running backs room. The team is set to have each of its top three options from last season – J.K. Dobbins, Gus Edwards and Justice Hill – return after they all missed the entire 2021 campaign due to injuries. They also drafted Tyler Badie in the sixth round of the draft, so while Davis is the most experienced player in the group, he is likely going to compete for no more than a depth role.