Kayvon Thibodeaux has, to no surprise, been a central figure in discussion surrounding the Giants’ offseason. The No. 5 overall pick has been dealing with a previously unspecified injury, however, limiting his ability to acclimate to the NFL in the build-up to his rookie campaign. 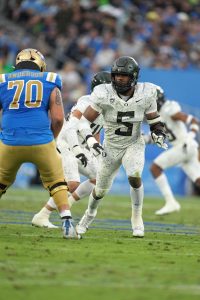 Dan Duggan of The Athletic reports (on Twitter) that the ailment in question is a “tweaked hip.” He adds that the injury is considered to be a minor one and posits that the Oregon alum should be fully healthy by training camp in July. More generally, Duggan notes that the team has been “excessively cautious” with injuries during the offseason so far (Twitter link), which could ease concerns about Thibodeaux missing time at the start of the season.

The 6-foot-5, 250 pounder figures to play a large part in the Giants’ defense right away. The team is eyeing a role for him which involves rushing not only off the edge, but from the interior as well. One of the main reasons for that is the fact that they had him rated higher than fellow pass rushers Travon Walker and Aidan Hutchinson, who were selected first and second overall, respectively.

Thibodeaux flashed his potential in college to the point of being in consideration for the top pick heading into the 2021 campaign. His stock waned during much of the pre-draft process due to concerns related to his work ethic, but rebounded in time to be a top-five selection. In New York, he will look to boost a pass rush which ranked 22nd in the league in sacks last season, while backing up his draft position and associated expectations in the process.