It sounds like the Saints’ 2021 first-round pick will be completely healthy heading into training camp. Saint defensive end Payton Turner announced on Twitter that he’s been medically cleared to return to the field. 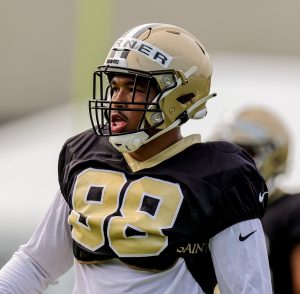 “It’s been a long road to recovery,” Turner wrote. “I had a pretty major shoulder surgery last November and didn’t have quite the rookie year I wanted, but shoutout to everybody that’s stayed down with me and helped me get to this point, blessed to say I’ve been cleared.”

Following a 2020 campaign at Houston that saw him finish with five sacks, 10.5 tackles for loss, and second-team All-ACC honors, the Saints selected Turner with the 28th-overall pick in the 2021 draft. The rookie saw an inconsistent role through the first half of the season, thanks in part to an undisclosed injury that halted his progress during training camp and a separate elbow injury that kept him off the field. He was inactive for three of New Orleans’ first eight games, with the defensive lineman collecting 12 tackles and one sack.

He suffered a shoulder injury in early November that ultimately landed him on injured reserve. The rook later underwent surgery, officially ending any hope that he’d return again in 2021.

The 23-year-old defensive end now has a chance at a fresh start in 2022, although it remains to be seen if new head coach (and former defensive coordinator) Dennis Allen will keep him on a tight leash. Considering his lack of experience, it could be difficult for Turner to jump Cameron Jordan and Marcus Davenport in the starting lineup. However, Davenport is rehabbing from his own shoulder surgery, which could open the door for the second-year pro.