The Bengals and safety Jessie Bates were unable to agree to terms on a new contract prior to the July 15 deadline for franchise-tagged players to sign an extension, and Bates is not planning to attend the team’s training camp. Still, Cincinnati does not plan to trade its fifth-year DB, as ESPN’s Jeremy Fowler said during an appearance on the Ari Meirov NFL Show (video link). 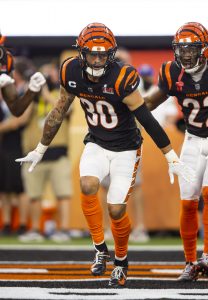 “The time to do it would’ve been before the deadline,” Fowler said (h/t Doug Kyed of Pro Football Focus (subscription required)). “Talking to people involved, I think the player would be very surprised, too. The Bengals haven’t shown a willingness to move him.”

Despite something of a down 2021 regular season, there surely would have been clubs interested in dealing for Bates and giving him a contract near the top of the safety market if the Bengals had entertained trade talks before July 15. Now, though, any acquiring club would be on the hook for the $12.9MM salary and cap number associated with Bates’ franchise tender, and not many teams can comfortably absorb such a charge at this point in the year. Plus, Cincinnati’s return for a safety who may turn into a one-year rental would likely be limited.

Bates has not yet signed his tender — which means that he cannot be fined for skipping training camp — but he will either need to sign it at some point or sit out the entire 2022 campaign, which seems highly unlikely. The only player in recent history to go that route was Le’Veon Bell, and with the benefit of hindsight, it is difficult to argue that was a good move for Bell’s career.

Cincinnati is also rostering Vonn Bell and first-round rookie Dax Hill, who took every OTA rep as the team’s starting free safety in Bates’ absence. The early returns on Hill have been positive, and while it should be expected that Bates will show up before he starts losing game checks, a parting of the ways in 2023 looks like a very real possibility.

Bell is also entering a platform year, and the Bengals may have found his eventual successor as well when they nabbed Tycen Anderson in the fifth round of this year’s draft. With quarterback Joe Burrow eligible for an extension at season’s end, Cincinnati is clearly looking for cost-controlled talent at non-premium positions.