The Bears worked out Davontae Harris last night, and they clearly liked what they saw from him. Chicago is signing the journeyman, per ESPN’s Jeremy Fowler (Twitter link). 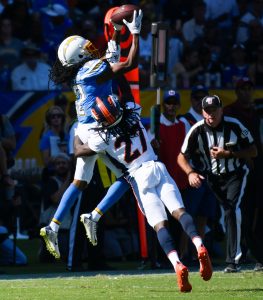 Harris, 27, was a fifth round pick of the Bengals in 2018. He only lasted one year in Cincinnati, though, signing in Denver the following season. His 23-game tenure with the Broncos remains the longest of his career with any one team, and included seven of his nine total starts.

For the most part, Harris is known for his special teams play. His third phase work (along with limited defensive duties) with the Ravens, who claimed him off waivers late in the 2020 season, earned him a new deal in Baltimore at the end of the campaign. Ultimately, though, he ended up splitting the past year between the Chargers (with whom he started one of five games) and 49ers.

In Chicago, the Illinois State product will look to provide depth behind a young group of starters at corner including the likes of Jaylon Johnson, Kindle Vildor and rookie Kyler Gordon. Fellow veteran Tavon Young is in line to have a role in the slot, but Harris will likely continue to work primarily as a special-teamer.

The Bears entered the day with more than $18MM in cap space, little of which will have been used up by this deal. That would leave plenty of room for further additions, such as Vernon Hargreaves, who headlined yesterday’s workouts, if they remain interested.