Connected to Anthony Barr for a bit now, the Cowboys are moving forward with a deal for the veteran linebacker. The sides agreed to terms Wednesday, Mike Garafolo of NFL.com tweets.

It’s a one-year contract worth up to $3MM, per Aaron Wilson of ProFootballNetwork.com and NFL.com’s Ian Rapoport (Twitter links). The deal carries a $2MM base value, Todd Archer of ESPN.com tweets. 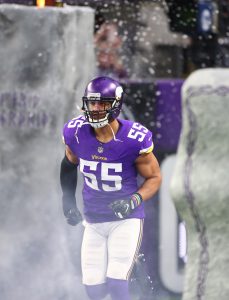 Barr, who had spent his entire career with the Vikings, did have another option. The Broncos pursued him as well, Ian Rapoport of NFL.com tweets. But the four-time Pro Bowler is heading to Dallas.

A college edge rusher, Barr transitioned to an off-ball role in Mike Zimmer‘s 4-3 defense. Barr still enjoyed some pass-rushing opportunities (17.5 career sacks), but for the most part, he operated a traditional linebacker. The early-career momentum that led Barr to four straight Pro Bowls from 2015-18 has faded. Barr, 30, missed 14 games in 2020 after tearing a pectoral muscle. He also missed six contests last year, and the Vikings’ new regime moved on.

Dallas parted ways with Jaylon Smith last season, but despite turning down Leighton Vander Esch‘s fifth-year option, the team circled back to the former first-rounder this year (via a one-year, $2MM deal). Vander Esch, however, is one of the NFL’s more injury-prone players. The Cowboys also have rookie fifth-round linebacker Damone Clark set to miss most of this season because of offseason spinal fusion surgery. Second-year ‘backer Jabril Cox is also making his way back from a rookie-year ACL tear. The combination of injury risks here likely induced the Cowboys to add a veteran.

Despite agreeing to an offseason pay cut last year, Barr still recorded a decent season in his Vikes finale. He notched 72 tackles, 2.5 sacks, three interceptions and five passes defensed. The UCLA product played a key role on stout Zimmer- and Edwards-led defenses during the latter part of the 2010s. The Vikings ranked in the top 11 defensively from 2015-19, leading to three playoff berths and one NFC championship game run. He will join a Cowboys linebacking corps headlined by Micah Parsons, a hybrid player coming off one of the best rookie seasons in NFL history.

Dallas’ injury issues notwithstanding, Denver had a more apparent linebacker need. The Broncos have not brought back top tackler Alexander Johnson, who remains a free agent. While the team did re-sign Josey Jewell, it has not invested much elsewhere at the inside linebacker spot. The team also moved 2021 ILB starter Baron Browning to outside ‘backer. The Broncos have signaled their interest in making a late-summer augmentation here via the Barr interest and a recent Joe Schobert visit. Perhaps Barr’s Cowboys decision leads the Broncos back to Schobert. Given the recent connections, it would surprise if the Broncos did not add a veteran at this spot soon.