Darius Slayton‘s Giants stock has dropped considerably this offseason. The team’s new regime has not appeared to view the fourth-year wide receiver in the same light compared to the one that drafted him. An exit looks to be in the cards for the former Giants leading receiver. 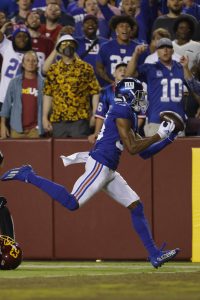 Trade inquiries have come in, according to Adam Schefter of ESPN.com (on Twitter). Slayton is due a $2.54MM base salary in 2022, and while the Auburn alum has not had a particularly good offseason, he has been a Giants regular in each of his three seasons. Teams have until 3pm CT Tuesday to finalize their 53-man rosters.

New York has been connected to parting ways with Slayton for months. The team shopped the former fifth-round pick before the draft. Slayton then did not impress during Brian Daboll‘s first offseason in charge, failing to be a first-team regular despite injuries to most of the Giants’ other top wideouts this summer.

With the likes of Kenny Golladay and Kadarius Toney back, and Sterling Shepard progressing toward a return, Slayton’s spot remains tenuous. A hamstring injury also slowed Slayton during training camp, but Jordan Raanan of ESPN.com notes he is back at full strength (Twitter link).

The Giants drafting Wan’Dale Robinson in Round 2, doing so after reaching a pay-cut agreement to retain Shepard, made Slayton vulnerable. Golladay’s guarantees essentially ensure him being part of Daboll’s first Giants squad, despite the ex-Lion’s woes since signing his big-ticket free agency deal last year, while the Toney trade talk that cropped up briefly this year has cooled. The team is ready to see what it has in the 2021 first-rounder.

New York does have roster injury-prone wideouts, in Shepard and Toney, and has seen Slayton post two 700-plus-yard seasons (in 2019 and ’20, both outings leading those Giants teams in receiving yards). He finished with just 339 yards last season, though no Giants pass catcher excelled on a miserable 2021 offense. Barring a trade, we may be a day away from Slayton hitting the waiver wire.