The first of this year’s Rams draft picks will not make his NFL debut until at least 2023. Guard Logan Bruss will miss this season after suffering right ACL and MCL tears during the Rams’ preseason game Friday night, Sean McVay said. 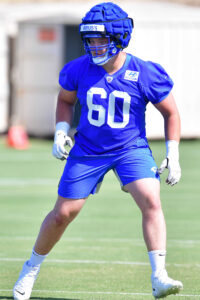 Chosen 104th overall, Bruss was expected to be at least a key backup for the Rams in 2022. The Wisconsin alum had been competing for the Rams’ starting right guard position during his first NFL offseason.

Austin Corbett‘s Panthers signing opened the door for a newcomer to step in, and while fourth-year blocker Coleman Shelton had emerged as the favorite, Bruss still loomed. This thins a Rams position group already weakened by Corbett’s Carolina defection. The team still has third-year lineman Tremayne Anchrum as an option and rosters 2019 third-round pick Bobby Evans as well.

Bruss was attempting to transition from college tackle to NFL guard. The Badgers used him as their primary right tackle from 2019-21, playing him only sparingly at guard. This injury will obviously hinder Bruss’ development. He finished his Big Ten career as a second-team all-conference performer in 2021.

The team’s other guard starter, David Edwards, is going into a contract year. That undoubtedly impacted the Rams’ decision to make Bruss their top 2022 draftee. Annually lacking a first-round pick — this time due to last year’s Matthew Stafford trade, which cost the Rams two firsts — the team was without its second- and third-round picks because of the Von Miller deadline swap. Bruss came to Los Angeles as a compensatory selection.

2 comments on “Rams G Logan Bruss Out For Season”