The Steelers gave Cameron Sutton a two-year, $9MM deal to retain him in 2021, but the veteran cornerback is not expected to sign an extension ahead of the 2023 league year. 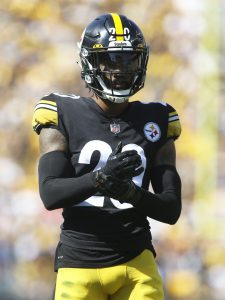 No negotiations between Sutton and the Steelers have taken place, according to the sixth-year defender (via The Athletic’s Mark Kaboly, on Twitter). Sutton said he will test free agency in 2023. With the Steelers not doing in-season negotiations, they would only — absent a deal over the next five weeks — have the period between the season’s conclusion and the mid-March legal tampering period to keep Sutton off the market.

With T.J. Watt and Minkah Fitzpatrick topping their respective markets, and Cameron Heyward signed to a big-ticket deal, the Steelers have kept costs low at cornerback. They have Sutton, Ahkello Witherspoon and Levi Wallace all tied to deals averaging between $4-$5MM per year. While select teams have cornerback groups consisting entirely of rookie-deal players, the Steelers managing this cost setup with three veteran-contract corners is interesting.

A 2017 third-round pick, Sutton is going into his age-27 season. With Joe Haden out of the picture, Sutton will be positioned as an even more important coverage player for the Steelers. Sutton intercepted a career-high two passes last year but saw his coverage numbers spike, as he played a career-high 1,153 defensive snaps (seventh-most among corners). He allowed a 104.9 passer rating as the closest defender and 8.6 yards per target — both numbers well north of his 2019 and ’20 marks — and graded outside Pro Football Focus’ top 75 at the position. PFF slotted Sutton inside its top 30 at corner in 2020.

Pittsburgh has Wallace and Witherspoon under control for two years, re-signing Witherspoon and picking up Wallace from the Bills. Haden’s departure — after lobbying for an extension ahead of last season — and Sutton’s potential 2023 exit would certainly point to corner being a draft priority next year.