The Bengals will be without one of their tight ends for a while, perhaps the rest of the season. Drew Sample will be sidelined for “several months” due to knee surgery, Zac Taylor said Wednesday. 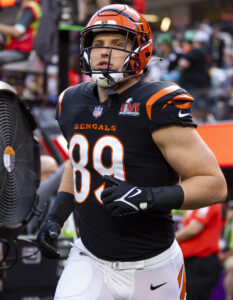 Sample suffered the knee injury during the Bengals’ Week 2 loss in Dallas. The fourth-year tight end started in each of Cincinnati’s first two games. This comes at a bad time for Sample, who is in a contract year. Initial tests revealed MCL and PCL damage, according to ESPN.com’s Jeremy Fowler, who adds this is likely a season-ending injury (Twitter link). Sample will undoubtedly be moved to IR soon.

A former second-round pick, Sample has started 25 games with the Bengals. The team has not viewed the University of Washington product as a pass-catching regular, preferring C.J. Uzomah and Hayden Hurst in those roles in recent years. Sample did catch 40 passes for 349 yards and a touchdown in 2020, however, when he saw action on 81% of Cincinnati’s offensive snaps. He played all 21 Bengals games last season, seeing a 42% snap share.

Cincinnati signed Hurst this offseason and claimed former third-round pick Devin Asiasi off waivers from the Patriots. Third-year UDFA Mitchell Wilcox rounds out the defending AFC champions’ tight end room, which lost Uzomah after the longtime Bengal signed with the Jets in March. The Bengals were connected to O.J. Howard, hosting him on a visit just before the season, but the ex-Buccaneers starter signed with the Texans.