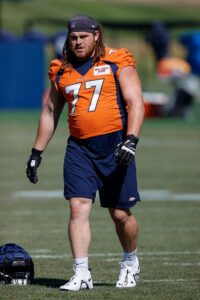 More Glasgow starts could be on tap. Meinerz suffered a hamstring injury that is expected to keep him out for what could be a lengthy stretch, Mike Klis of 9News tweets. Meinerz, whom Klis adds could miss four games, suffered the injury during the Broncos’ first possession Monday. The Broncos will likely consider an IR move here, though with the possibility Meinerz could return before Week 6, it might also make sense to wait.

The Broncos have considerable experience on their second-string offensive line. In addition to signing Tom Compton and Cameron Fleming, the team rosters Glasgow, who was a full-time starter from 2016-21. Meinerz, however, took over after Glasgow’s midseason injury last year and won the job out of camp.

Denver signed Glasgow to a four-year, $44MM deal in 2020, John Elway‘s final offseason as the team’s GM. The team drafted Meinerz, a third-round pick out of Division III Wisconsin-Whitewater, during George Paton’s first draft in that role. The younger lineman figures to be a key part of the Broncos’ offensive line plans moving forward, being signed through 2024. But Glasgow may well get his job back for the time being.

Seahawks defensive tackle Al Woods helped cause the second of the Broncos’ two goal-line fumbles Monday night, driving Glasgow into Javonte Williams on that play. But the Broncos still should have a quality option in the seventh-year veteran. The former Lions draftee has started 78 career games, including 20 with the Broncos. Following Glasgow’s season-ending broken ankle, the Broncos reworked his contract. Glasgow, 30, is earning $3.1MM in 2022 base salary and counting $6.1MM on Denver’s cap.