D’Andre Swift has battled an ankle injury throughout the young season, but a new ailment could keep him sidelined. The Lions’ top running back suffered a shoulder sprain during yesterday’s game, per Tom Pelissero of NFL Network (Twitter link). 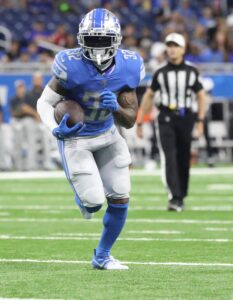 [RELATED: Lions S Walker Out For Season With Achilles Tear]

Head coach Dan Campbell indicated that the team may proceed with caution with Swift, resting him for the team’s next two games (Twitter link via Dave Birkett of the Detroit Free Press). Detroit’s bye is in Week 6, so that timetable would seemingly give him ample time to recover. It would, however, represent another instance of availability problems for the 23-year-old.

Swift missed three games as a rookie, then four last season. Of note is the fact that the latter absence was caused by a shoulder injury, though this latest one is considered unrelated. When he has been on the field, the former second-rounder has showcased his dual-threat ability and established himself as Detroit’s top running back. With over 1,000 scrimmage yards in 2021, expectations were high for another productive campaign this year.

Things started well for the Georgia product. Swift has averaged an absurd 8.6 yards per carry in the limited opportunities he has had so far (231 yards on 27 carries), adding eight catches for 77 yards and a touchdown. The lingering ankle issues have led to a reduced workload, with veteran Jamaal Williams seeing significant snaps in his place.

Assuming Swift is shut down until Week 7, Williams will be in line for even more carries than they 43 he has already logged this year – which have resulted in a league-leading four rushing touchdowns. Behind him, the Lions have free agent signing Justin Jackson and journeyman Craig Reynolds available as depth. With a healthy pass-catching corps (save for first-round rookie Jameson Williams), Detroit may need to rely more on their air attack for the next few weeks.