With the Pro Bowl as we know it going away, the structure of the retooled event came into focus Thursday. The NFL and NFLPA announced an early version of what will be replacing the decades-long all-star game. 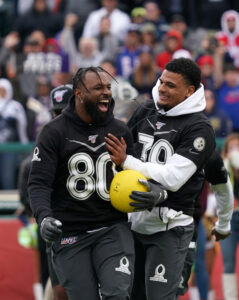 Calling it a “replacement event,” the league and the union announced the players selected will be required to participate (barring injury). That marks a change from the 2020 CBA, which indicated participation in a Pro Bowl replacement voluntary. While it is worth speculating whether the term “Pro Bowler” will remain in place, it will be interesting to see if nearly as many alternates will be named compared to the recent past, which saw numerous primary and auxiliary alternate players given Pro Bowl invites.

A series of skills challenges — including dodgeball, quarterback drills, “best catch” and “thread the needle” — will take place during the usual Pro Bowl week. On the Sunday before Super Bowl LVII, a seven-on-seven flag football event will be held. Only skill-position players, as is the case in seven-on-seven sessions, will participate in that game. Other skill-related activities, presumably for linemen and specialists, will be on tap for that revamped Sunday.

Players representing the conference declared the winner — based on various scores from the skills events — will receive $84K, while the losing conference’s all-stars will collect $42K. To receive a share, players must participate in the Sunday event and at least one game-week event. This is unchanged from the shares players would receive for Pro Bowl participation.

The Pro Bowl had been in place since 1938, but as the exhibition declined in popularity, calls for its end came for several years. Starters frequently bowed out, and the game’s effort level was understandably not comparable to regular contests. In 2016, an NFL-record 135 players were named Pro Bowlers, due to the number of alternates needed to be invited to ensure full rosters, while ESPN.com’s Kevin Seifert adds 125 were summoned in 2017. The alternate count led to the “Pro Bowler” label losing luster. The skills challenge week, or however it will be referred this year, almost certainly will not need that many players to fill out rosters, perhaps leading to a more consistent number of all-stars each year.