After three Patriots stints, Jamie Collins is meeting with some familiar decision-makers. The Raiders are hosting the veteran linebacker on a visit Wednesday, Field Yates of ESPN.com tweets. 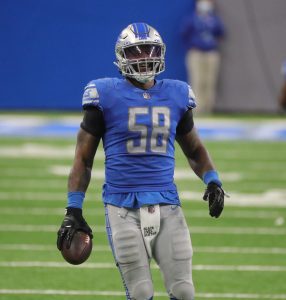 Longtime Patriots OC Josh McDaniels and ex-New England executive Dave Ziegler are now running the Raiders, who have former Pats assistant Patrick Graham on board as DC. Graham was Collins’ position coach from 2014-15. This marks the first Collins connection since his most recent Patriots contract expired.

Collins, 32, has ventured out of New England twice previously; each instance brought a nice contract. The Browns, after trading for Collins during the 2016 season, authorized a monster extension not long after. The Lions, who previously had ex-Patriot staffers Matt Patricia and Bob Quinn in place, signed Collins in 2020. After the Browns and Lions cut him, in 2019 and 2021, respectively, Collins made his way back to the Patriots.

Last season, Collins worked mostly as a Pats backup. He played in 10 games (two starts) with the team that took him in the 2013 second round. The hybrid performer was much more productive for the Pats in 2019, when he notched seven sacks, three forced fumbles and three INTs — one of them a pick-six.

The Raiders made changes at linebacker this offseason, designating Cory Littleton and Nick Kwiatkoski as post-June 1 cuts. The team also did not re-sign K.J. Wright or Nicholas Morrow. Denzel Perryman remains in place, however, and the AFC West squad signed ex-Titan Jayon Brown. Collins’ history as a part-time pass rusher (26.5 career sacks, including four four-plus-sack seasons) could be of interest here as well, with the Raiders having released Kyler Fackrell with an injury settlement and placing fellow OLB addition Jordan Jenkins on IR.