Johnathan Abram‘s future with the Raiders both in 2022 and beyond seemed to be in question this offseason. His status as a starter was once in doubt, but his tenure under the team’s new coaching staff has begun with a somewhat surprising new role. 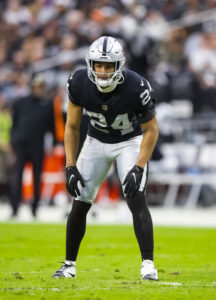 As noted by Tashan Reed of the Athletic (subscription required), Abram has not only remained a starter, but he has seen time at a number of different positions. The 25-year-old has been aligned at both safety spots, but also inside and outside linebacker, along with cornerback and nickelback. That represents a stark contrast to the sense dating back to July that Abram could be relegated to backup duties.

That sentiment was fueled in part by the fact that veteran Duron Harmon was signed during free agency to compete for a first-team spot. On a larger scale, the team’s decision to decline Abram’s fifth-year option makes the 2022 campaign a contract year for the former first-rounder. Instead of being phased out, Abram has been an effective and productive member of new defensive coordinator Patrick Graham‘s unit.

The Mississippi State product has played all but one defensive snap through two weeks, making 19 tackles. He has also put up better numbers in coverage than his previous seasons in the league, something which had been a sore spot early in his career.

“He’s a smart guy,” head coach Josh McDaniels said. “I mean, we put a lot on him. He’s been able to handle the duality of the multiple roles that we’ve given him. He’s a big cog in terms of the overall communication on the defense.”

Staying healthy and in control with respect to his physicality will, of course, remain important factors in determining Abram’s success this season. If he continues to wear multiple hats, though, he could not only help the Raiders’ defense in general, but also boost his own free agent stock heading into the spring.