Latavius Murray is back with the Saints. The former Alvin Kamara backup agreed to return to the team, via a practice squad agreement, on Tuesday. 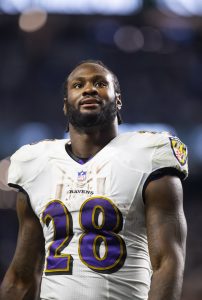 The veteran running back spent the 2019 and 2020 seasons in New Orleans, working alongside Kamara for playoff-bound Saints squads. The Saints released Murray just before last season started, leading him to the Ravens. Murray, 32, did not spend training camp with a team this year.

Kamara is now battling a rib injury, and the Saints spent the offseason with their backup running back position on the radar. Despite being connected to veterans, most notably David Johnson, the team moved into the regular season with its incumbent backups. Mark Ingram, 3297, resides as Kamara’s top understudy. Dwayne Washington and Tony Jones are the other running backs on New Orleans’ active roster.

A former Raiders starter who has made a nice career out of backup/1-B running back duty in his post-Oakland years, Murray was productive for the Saints during his first stint. He totaled 1,293 rushing yards and nine touchdowns in two New Orleans seasons. The Saints missed Murray last year, with Kamara missing a handful of midseason games due to injury. With the Ravens, Murray amassed 501 rushing yards (4.2 per carry) and six touchdowns.

If Murray is bumped up to New Orleans’ active roster, the Saints will be the rare team to roster two 30-something backs. Murray, whom the Raiders chose in the 2014 sixth round, has made 69 career starts. Ingram has 97 starts on his resume. Kamara already entered the season as a candidate to miss time, due to a February assault charge, but it is unclear if a suspension will come in 2022 or 2023. Kamara’s injury issue has moved the Saints to make preparations.

One comment on “Saints To Bring Back RB Latavius Murray”