The Cowboys are still awaiting the return of their starting quarterback, but one of his favorite pass-catchers is set to return tomorrow. NFL Network’s Ian Rapoport reports that tight end Dalton Schultz is expected to play against the Commanders (Twitter link). 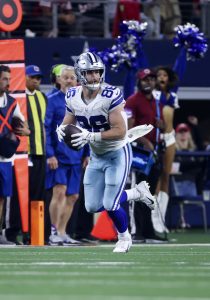 Schultz missed out on Dallas’ Week 3 contest due to a PCL injury. His recovery has gone smoothly, however, leading to optimism that he would not be sidelined for very long. A return to full health would be a welcomed sight for the Cowboys, considering the fact that Schultz was on the field for every offensive play in the team’s season opener and logged a 90% snap share the following week.

A 2018 fourth-round pick, the 26-year-old emerged as a key contributor in the team’s highly-productive passing game over the past two years. That led to the Cowboys making the expected decision of placing the franchise tag on him. At times, it seemed as though a long-term deal would be reached, but nothing materialized, tying the Stanford alum to a $10.9MM cap figure this season.

Especially given the lack of proven players in Dallas’ pass-catching corps to start the campaign, that led to significant expectations for Schultz. So far, he has totaled just nine catches for 80 scoreless yards, though one of his two contests came with backup Cooper Rush under center, of course. That will be the case for at least one more week.

It remains to be seen if wideout Michael Gallup will make his season debut. He continues to rehab the torn ACL which he suffered last December; there were indications that he would play in a limited capacity last week, but the team has understandably remained cautious with his return to the field. With CeeDee Lamb operating as the unquestioned No. 1 at the position, Dallas’ passing game currently ranks 25th in the league with an average of 216 yards per game. A healthy Schultz and Gallup could go a long way to that figure improving, and Dallas moving to 3-1 on the season.