Anthony Rush will go from being 4-for-4 in Falcons 2022 starts to the waiver wire. The Falcons cut their starting nose tackle Thursday, the team announced. 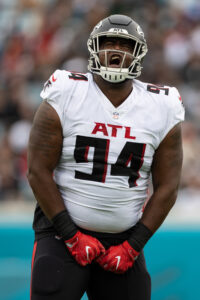 This move comes months after the player who was set to challenge or potentially usurp Rush at the position, Eddie Goldman, retired shortly after signing with Atlanta. Nevertheless, Dean Pees‘ defense will have a new starting nose in Week 5.

Rush, 26, had played 33% of Atlanta’s defensive snaps this season. Weighing north of 360 pounds, Rush worked as a run-stopper with the rebuilding team. Pro Football Focus had graded Rush outside the top 100 among interior defensive linemen, however. The former UDFA started six games for the Falcons last year, after coming over from the Titans midseason. He has played with five teams since coming into the league in 2019.

Grady Jarrett continues to work as the Falcons’ D-line mainstay, while 2021 fifth-round pick Ta’Quon Graham has seen his defensive snap rate rise to 63% this season. Marlon Davidson, a 2020 second-rounder, remains on IR after undergoing arthroscopic surgery late in the offseason. Journeyman Abdullah Anderson and rookie Timmy Horne, who have each been rotational players in Pees’ second season in Atlanta, could see more playing time as a result of this somewhat surprising Rush transaction.