The Falcons will be without two of their difference-making skill players in Week 5. After placing Cordarrelle Patterson on IR, Atlanta ruled out Kyle Pitts for its game against Tampa Bay. 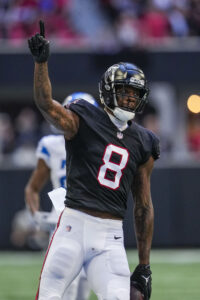 Pitts is battling a hamstring injury that led to three practice absences this week. The Falcons will give their highly drafted tight end more time to heal up. This will be Pitts’ first missed game as a pro.

Patterson, Pitts and Drake London represent the Falcons’ top weapons, and although Pitts is not on pace to match his strong rookie season just yet, he is obviously a critical part of the franchise’s present and future. The absences of Pitts and Patterson will challenge Arthur Smith‘s offense against the Buccaneers.

The league’s highest-drafted tight end since the AFL-NFL merger (No. 4 overall), Pitts has 10 receptions for 150 yards through four games. Last year, the former Florida dynamo delivered one of the best rookie seasons in the position’s history — a 68-catch, 1,026-yard offering — to secure a Pro Bowl nod and establish himself as Atlanta’s passing-game centerpiece for the foreseeable future.

This will make for an adjustment for the Falcons, who have won two straight. Traditional running backs will replace Patterson, with rookie Tyler Allgeier and Caleb Huntley in place as Atlanta’s top runners. Free agency addition Damien Williams joins Patterson on IR. The Falcons have former UDFA Parker Hesse in place as their No. 2 tight end. Despite his undrafted status, Hesse played 87% of the Falcons’ offensive snaps in Week 4. The Iowa product has three receptions for 32 yards this season.

One comment on “Falcons Rule Out Kyle Pitts For Week 5”