The Falcons will be without their top offensive contributor for several weeks. Running back Cordarrelle Patterson has been placed on IR after undergoing a minor knee procedure this morning, per a team announcement. As a result, he will miss at least the next four games. 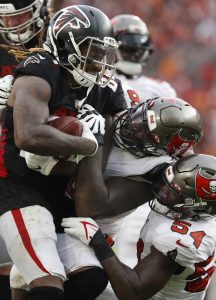 The 31-year-old had been dealing with the injury in the build-up to yesterday’s game against the Browns. It limited his practice time, and led to him only playing 16 offensive snaps. That fell well short of his usage during the other three games this season, a stretch in which he put up 302 rushing yards. Especially in the absence of Damien Williams, Patterson has played a central role in Atlanta ranking fourth in the league with 168 yards per game on the ground.

That, in turn, represented a continuation of the Tennessee alum’s production from last year. His role both on offense and special teams earned him a two-year deal in March. Patterson has not seen much action in the passing game this season, but he will nevertheless be sorely missed in a Falcons offense which is lacking in established skill position players.

With both Patterson and Williams on the shelf, Atlanta will turn to far less experienced options. Caleb Huntley, who was elevated from the practice squad for yesterday’s contest, ran for 56 yards and a touchdown on Sunday. The team announced on Monday that he has been signed to the active roster with the spot opened up by Patterson’s IR designation.

Another rookie who is in line for more work is Tyler Allgeier. The fifth-rounder posted 84 rushing yards against the Browns, and has seen his snap share increase in each of the three games he has played in. Those two will likely see the majority of carries moving forward, as the team awaits the return of one of the league’s most unique offensive threats.