Not long after last night’s win, it was revealed that the Ravens would be without one of their key defensive contributors for an extended period. Today, head coach John Harbaugh confirmed that safety Marcus Williams will go on injured reserve, though he is expected back at some point this season. 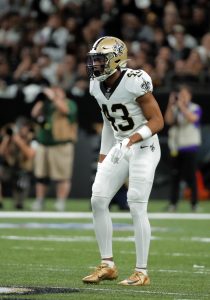 Williams suffered a dislocated wrist on Sunday against the Bengals, and was forced to leave the game early. For a stretch, he attempted to play through the injury before being forced to the sidelines. “He gutted it out,” Harbaugh said, via ESPN’s Jamison Hensley. “He didn’t really say too much about it. So I don’t think anybody realized how serious it was until they got inside and took a look at it.”

The 26-year-old spent the first five seasons of his career with the Saints. Over that time, he established himself as one of the league’s top ball-hawks with 15 interceptions and 38 passes defensed. He therefore entered this offseason as one of the league’s most coveted defensive free agents, and landed a five-year, $70MM deal in March.

Williams’ start to his Baltimore tenure represented an effective return on investment for the Ravens. He registered three interceptions across his first two contests, and has allowed an opposing passer rating of 67.1, the lowest such mark of his career. His absence will be felt in a Ravens secondary whose performances (at least heading into Week 5) had been marked by significant blown leads.

Veteran Chuck Clark remains as a steady presence on Baltimore’s back end. Who he will be paired with becomes an important question, however. 2020 seventh-rounder Geno Stone filled in for Williams last night, but has primarily been used on special teams in his young career. Another option is Kyle Hamilton, the team’s top pick in this year’s draft and whose addition led Clark to request a trade in the offseason.

Now atop the AFC North, the Ravens will likely use a combination of both Stone and Hamilton while attempting to make up for the loss of Williams. The way their defense reacts will be worth watching throughout his absence.