OCTOBER 1: As noted (on Twitter) by Pro Football Talk’s Mike Florio on Sunday, Cook is expected to wear a brace, allowing him to suit up for tomorrow’s game. Pelissero tweets that the 27-year-old has since been taken off the injury report, which should clear him to handle a full workload against the Saints.

SEPTEMBER 25: The Vikings veteran running back Dalvin Cook suffered a familiar injury this week versus the Lions, dislocating his right shoulder, according to Tom Pelissero of NFL Network. Cook has long dealt with an unrepaired torn labrum that he’s been able to play through in the past. He wasn’t wearing a harness today, which led to the dislocation, but he should be okay to play next Sunday against the Saints with a harness. 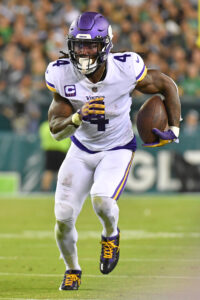 Cook has made a habit of missing time each season, having not played for the entire regular season in any of his six years in the league, so the fact that he shouldn’t miss anything time due to the injury should be a relief for Minnesota. Despite routinely missing two to five games per year, since losing most of his rookie season to an ACL tear, Cook has been extremely productive with his time on the field, earning Pro Bowl appearances in each of the last three seasons.

Even if shoulder pain does force Cook to miss some time, or even just to take a smaller share of snaps, the Vikings have a reliable backup running back in Alexander Mattison. In three years with the Vikings, the 24-year-old has amassed rushing totals of 462, 434, and 491 yards. In addition to his consistency running the ball, Mattison has improved as a pass catcher each season. When Mattison was asked to start four games last year, the Boise State alumnus delivered for his team. As a starter last year, Mattison totaled 356 rushing yards for two touchdown and 19 receptions for 162 yards and a touchdown in those four games.

Cook should be fine to contribute next week and, if not, the Vikings will be completely comfortable trotting Mattison out there. Behind those two, Minnesota rosters kick returning ace Kene Nwangwu and rookie fifth-round pick Ty Chandler.