D.J. Humphries joined Justin Pugh and Rodney Hudson as Cardinals offensive line starters on IR on Saturday. Like Pugh, Humphries’ stay on the injured list will cover the rest of the season.

Kliff Kingsbury said Monday the eighth-year tackle will not return from the back injury that sent him to IR. Humphries made it through eight games this season; he has not played since Arizona’s loss to Seattle in Week 9. 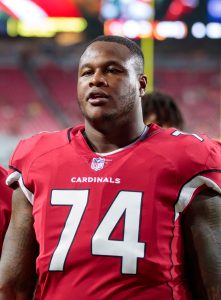 This injury absence comes after the Cardinals locked down Humphries on another three-year extension. Despite being a left tackle starter in his prime, Humphries opted against tabling an extension and testing the 2023 free agent market. He is signed to a three-year, $51MM deal that runs through 2025. Humphries locking in $28.8MM fully guaranteed looks better now than it did this offseason, when the contract made the 28-year-old blocker just the 14th-highest-paid tackle (AAV-wise) in the league.

The former first-round pick’s run of good health during his prime led to the Cardinals giving him three-year deals in both 2020 and 2022, but injuries have been a notable part of Humphries’ career. He missed all of his rookie season, 11 games in 2017 and seven in 2018. The Florida product only ended up missing one contest (due to COVID-19) from 2019-21, setting himself up for multiple paydays. Pro Football Focus rates Humphries as the league’s No. 25 overall tackle this season.

It is easier to name the Cardinals offensive starters who have not missed time due to injury this year, but health issues have been a particular problem up front. Pugh went down with an ACL tear in Week 6; Hudson has been out with a knee injury since Week 4. Both Hudson and Pugh contemplated retirement this offseason, but each moved forward with the team. Arizona trotted out one of the league’s oldest O-lines this season; the veteran unit was much healthier last year.

Former third-round pick Josh Jones has stepped in for Humphries at the blindside post; he will have an extended audition during what is looking like a lost season for a franchise that voyaged to the playoffs in 2021.

4 comments on “D.J. Humphries To Miss Rest Of Season”