Shortly after Steve Keim indicated the Cardinals were confident they’d retain D.J. Humphries in free agency, Arizona’s left tackle has agreed to terms to stay with the franchise that drafted him. 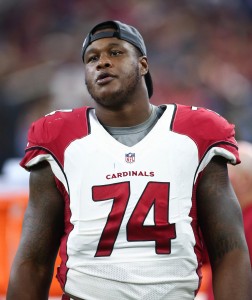 Humphries agreed to a three-year, $45MM extension on Monday, Mike Garafolo of NFL.com tweets. The former first-round pick will receive $30MM over the first two years of that deal, and the pact contains $29MM guaranteed. This takes one of the top offensive linemen off the free agent market.

The second year of Humphries’ deal – worth $15MM – will become guaranteed on March 21 of this year, Kent Somers of The Arizona Republic tweets. That means the first two years are effectively guaranteed; a big win for the lineman and his camp.

Humphries, 26, now becomes the NFL’s fifth-highest-paid tackle, in terms of per-year salary. He’s also one of five $15MM-AAV offensive linemen. A Humphries franchise tag would have cost Arizona nearly $15MM; that certainly played a role in these extension talks.

While Humphries has battled injuries and inconsistency, the Cardinals are sold he can be Kyler Murray‘s blind-side protector for years to come. The Cardinals had not seen Humphries play 16 games until this past season. From 2017-18, he played five and nine, respectively. Knee issues sidelined Humphries during those slates, which came after a 2015 rookie season in which he was inactive throughout. This is a big bet from Keim, whose record on first-round picks between Humphries and Murray has not been great.

From 2016-18, the Cardinals used first-round picks on Robert Nkemdiche, Haason Reddick and Josh Rosen. None were starters by season’s end; Reddick is the only member of this trio who remains with the Cards. He will almost certainly see his fifth-year option declined come May. Humphries has outperformed this trio, but other than a brief 2017 work sample, Pro Football Focus has not raved about the ex-Florida blocker’s work. That has not stopped teams from big tackle investments, however. The Buccaneers gave Donovan Smith a major extension last year, despite frequent down reviews from PFF.

Humphries began his career as Arizona’s right tackle in 2016 but switched to the left side a year later, moving Jared Veldheer from his long-held left tackle post. Humphries has played for three head coaches, but despite Kliff Kingsbury being early in his Texas Tech tenure when the Cards drafted the 6-foot-5 tackle, the second-year Arizona coach has entrusted him to protect the franchise’s top investment for a while.